The big Hollywood movie has been highly anticipated, so we went on a team outing to watch it and see how they portrayed this powerful story. 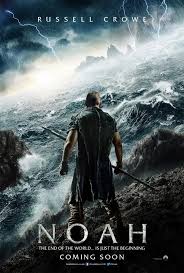 Now, where were we, oh yes, the movie.

As story tellers ourselves, we appreciate the difficulties of imagining and filling in the real-life interactions that are left unsaid, or only hinted at, by the Bible. If the director only used the details provided by the Bible, the movie would have a 15 minute run-time!

Some of the imaginative parts: like the watchman rocks who helped Noah build a lot of the ark, felt a bit “action movie” ish, almost like they recycled transformers

We liked how it explored the concept of sin and wickedness of men, and was not so black and white about “good” vs “bad” people.  Noah recognized that even within himself and his family, there are wicked intents, it is within mankind itself because of the fall and the seed of Adam. We saw that even in Noah’s family, with the strife between father and both sons over their children and future.  Ham would betray his father over a girl he barely met for a few hours, but the desire to procreate and have his own family is strong I guess.

The descendants of Cain wanted to control their own destinies, not let God.  While I see how it really helped with the human elements of the plot to have Noah be that decider of the future of mankind with his own family, this is fundamentally where the movie missed the “point” of the Bible as a whole – that God had a plan to redeem mankind from the beginning.  The choice was not Noah’s, the sacrifice was made by God by sending Jesus, his own Son, down to earth to redeem mankind and take on the punishment for our sins.  God didn’t make it up as he went along, he had this plan even in Genesis, though he was heartbroken at the rebellion of man.  God loved us so much that He would give up His only son to be killed at the cross by man, for man.  THIS is the gospel, and THIS is why 4Soils exists, not to re-tell an old story, but to tell an on-going story, that applies to you and me today.

What did you think of the movie?  And are you taking your children to see it?